In the most recent revisions to Covid limitations, Canada and Denmark are among seven nations that have been moved to the Green List.

Thailand and Montenegro have been included in the UK government’s red list, indicating that they are among the most dangerous travel destinations.

Finland, the Azores, Switzerland, Liechtenstein, and Lithuania will join the green list as well.

The revised rules will come into effect from Monday, at 04:00 BST.

Travellers returning to the UK from countries on the green list are exempted from quarantine, regardless of whether they have received two doses of the coronavirus vaccination or not.

However, the passengers are supposed to get tested before travelling to the UK and after they land in the UK. Furthermore, the passengers will be required to fill out a passenger location form.

While Canada has been added to the green list, British nationals are still prohibited from visiting the country.

If a country is on the red list, then only the UK or Irish nationals or UK residents are allowed to enter the UK from there. They must then pay to self-isolate at a government-certified hotel that has been certified by the UK authorities.

The revisions to the red list are being made to reflect “rising case rates in these countries and the serious risk that travel from these countries poses to UK public health,” according to the Department of Transport. 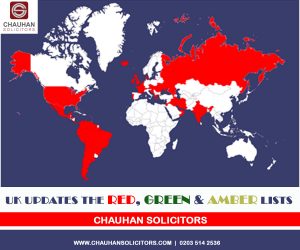 Every three weeks, the travel lists are updated by the UK authorities. Most nations are on the amber list, which means that fully vaccinated people do not have to quarantine as they land in the UK, but they must undergo testing before leaving and when they land in the UK.

Moreover, those who have not been double jabbed must isolate for 10 days at home before undergoing the COVID-19 testing.

The “limited number of green locations” is making overseas travel “more costly, onerous, and unpredictable compared to other countries,” according to Airlines UK, which serves UK-registered airlines.

“Numerous families are awaiting the regulatory changes and are paying exorbitant testing fees. However, there are no signs from the government’s part that this will shift,” a spokesperson stated.

“It’s time for a more balanced approach, with tougher limitations focused at a small number of high-risk nations, as has already happened across Europe, where testing is abandoned for the fully vaccinated and from areas where COVID concerns are negligible.”

Changes to the movement traffic signal system, according to Charlie Cornish, CEO of Manchester Airports Group, which operates airports in Manchester, London Stansted, and the East Midlands, will make a “slight variation” in the transportation industry’s recovery, and he has approached the government to “modify” it.

He said except if the public authority eliminated the requirement for completely immunized individuals to step through exams, it would “keep on wasting the benefit reality that our driving immunization program should convey.”

Shadow transport secretary Jim McMahon cautioned “any relaxing of limitations conveys with its hazards, especially from variations that could sabotage the advancement we have made on vaccines.”

Scotland’s Transport Secretary Michael Matheson said the progressions were “welcome for Scots with friends and family in Canada, however indeed show that global travel stays testing.”

We use cookies on our website to give you the most relevant experience by remembering your preferences and repeat visits. .Read More
Cookie SettingsAccept
Manage consent

This website uses cookies to improve your experience while you navigate through the website. Out of these, the cookies that are categorized as necessary are stored on your browser as they are essential for the working of basic functionalities of the website. We also use third-party cookies that help us analyze and understand how you use this website. These cookies will be stored in your browser only with your consent. You also have the option to opt-out of these cookies. But opting out of some of these cookies may affect your browsing experience.
Necessary Always Enabled
Necessary cookies are absolutely essential for the website to function properly. These cookies ensure basic functionalities and security features of the website, anonymously.
Functional
Functional cookies help to perform certain functionalities like sharing the content of the website on social media platforms, collect feedbacks, and other third-party features.
Performance
Performance cookies are used to understand and analyze the key performance indexes of the website which helps in delivering a better user experience for the visitors.
Analytics
Analytical cookies are used to understand how visitors interact with the website. These cookies help provide information on metrics the number of visitors, bounce rate, traffic source, etc.
Advertisement
Advertisement cookies are used to provide visitors with relevant ads and marketing campaigns. These cookies track visitors across websites and collect information to provide customized ads.
Others
Other uncategorized cookies are those that are being analyzed and have not been classified into a category as yet.
SAVE & ACCEPT